We envision to sustain honesty and responsibility among the officials and employees and to take appropriate measurement to promote transparency in each department and offices in the matters of transacting with the public.

The Municipality of Lantawan in the Province of Basilan shall promote integrity, accountability, systematic management of public affairs and public property as well as to establish effective practices aimed at the prevention of graft and corruption in its governance. 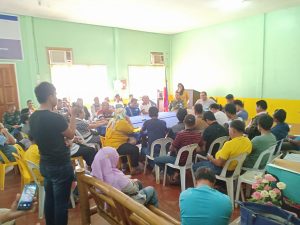 An Emergency MPOC Meeting conducted due to recent atrocities happened in some other provinces/municipalities and cities, the meeting is presided by Honorable Rustam M. Ismael together with the PNP PINSP Joseph Gordovez, AFP Capt. Elmer Malucon of 14th SF,and participated by the 25 Barangay Chairmen and Religious Sectors,wherein both Muslim and Christian are well represented.

It’s aim is to let the barangay officials and other group leaders in their respective area of responsibilities to be vigilant at all times effective immediately.

Assalamu alaykum wa rahmatullahi wa barakatuhu to all my people in Lantawan Municipality.

It is indeed a great honor and pride to be your Mayor in this beautiful Municipality of Lantawan. To lead is not just by chance but a calling and destiny, with an intense mission to serve my people and my community.

In this new era of my administration, you can rest asssured that we will be working with peace and harmony to attain development in a greater height. The mandate, vision, and mission of the municipality will serve as a guiding principles that give direction of my governance.

Thus, I am reaching out to all stakeholders to hold strong relationship in maintaining the good name and reputation of Lantawan and to continue serving our people in a meaningful and beneficial way that they deserve. Let us uphold the value of collaborative and cooperative way of endeavor to achieve peace and development. Be conspicuous to our action with refinement and sincerity in service delivery coupled with equity and equality, with a basis of transparency. Let us envisage then positive progress and development in this municipality across cultural diversity.

May our Almighty Allah Subahanallahu Ta'ala protects us from any harm.